Ksenia Rychtycka ~ an interview and her novel ~ Crossing the Border 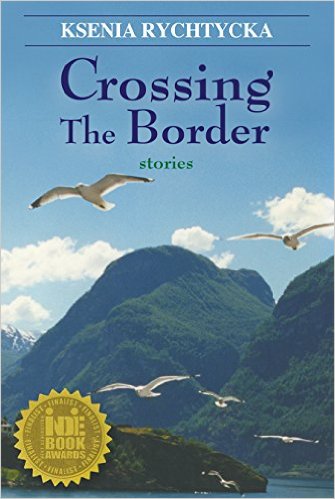 Ksenia Rychtycka’s debut collection Crossing the Border illuminates moments of tragedy and triumph, personal discovery and disillusionment, spotlighting characters who, in one form or another, learn to move forward with their lives.

Stymied by the lack of progress and change in post-communist Ukraine, Valeriy the artist finds he is unable to paint. Anna is a lonely woman who attends strangers’ weddings to offer a curious gift. The arrival of a wayward parakeet during the 2004 Orange Revolution forces an elderly woman into action.

These nine stories—set in Ukraine, the United States and Greece—highlight universal conflicts and dilemmas, along with the uncertainties and complexities of change, and introduce a strong new voice in storytelling.


PURCHASE “CROSSING THE BORDER” ON AMAZON.COM

Tell us about Crossing the Border.
Crossing the Border is a short story collection that focuses on Ukrainian characters who have undergone universal human experiences – heartbreak, family discord and resentment, tragic loss, starting over whether through immigration or other circumstances, figuring out one’s sense of self-identity, etc. In one way or another, the characters are confronted with various physical and emotional barriers yet they must somehow find the strength to move forward. Some of the stories are set against the political realities in Ukraine such as the breakup of the Soviet Union and how those circumstances interweave into one’s personal life. Other stories take place in the United States and focus on the challenges immigrants face in adapting to new lives while holding on to the traditions and culture of their background.

Have you always wanted to be a writer?
Yes, I knew when I was ten years old that I wanted to be a writer. I always loved reading books and my mother read stories to me and really encouraged my creativity. I never had any doubt about it. I had a vivid imagination and would think up stories in my head before transferring them to the page.

What was the first thing you ever wrote?
It was a poem I wrote when I was seven years old and it was about the Black Sea and the Carpathian Mountains in Ukraine. My parents were Ukrainian immigrants and Ukrainian was my first language so the poem was written in Ukrainian. The second piece I wrote was a short children’s story about a star named Sophia.

Where do you get your story ideas from?Ideas come from various sources. It can be triggered by an article I read, an overheard conversation, personal experiences or experiences I’ve heard about from others. Sometimes an image sparks something and you don’t even know where it’s going to lead you. But I’ve learned to trust my instincts. My short story The Bell Tower began from an image of an elderly man climbing up a set of stairs. I had no idea where the story was set or where the man was going or why it was so important. But I couldn’t shake that image.

What do you think makes a good story?
Well-rounded characters, conflict and a resolution that is satisfying and has been earned through the telling of the story. You want the readers to care about your characters and feel strongly about them whether it’s in a positive or negative way. I think openings are very important in drawing the reader in and of course the ending has to match that level of expectation and investment. I also believe in allowing readers to draw their own conclusions.

What do you like to do when you’re not writing? I love to read and travel and go to art exhibits, and attend craft and book festivals. I love going into little shops and browsing and finding interesting knick knacks, candles or exotic teas. I have fun going to those year-round Christmas stores and collecting ornaments for my collection. People watching is very interesting. When I was backpacking through Europe, I’d sit at cafes or parks and would just enjoy observing the people around me. Observation is a good practice for writing actually. I also enjoy getting together with my friends and family, taking my dog for a walk, taking a scenic drive by a lake. I love water – it is very calming.

Who would you say has been a major influence in your life?
I was raised by a single mom and she always supported and encouraged me. I learned to be strong and persevere through her example and she gave me the confidence to really go after the goals I had set for myself.

What types of books do you like to read?
I enjoy literary fiction, historical fiction, myth and magical realism novels, poetry, and travel memoirs. When I was writing my collection, I especially liked reading books by other authors who came from immigrant backgrounds as that helped me develop my own experiences into my stories.

What would readers be surprised to know about you?
I write poetry and I can sense the rhythm of a poem in my head before I start writing. Poetry is like music but I’m not musically inclined in the least. I tried to learn to play a few musical instruments in my childhood but that was a disaster. I can’t carry a tune at all even though I love music and it’s a big part of my life.

Are you working on anything now?
I’ve been writing poetry and am putting together a chapbook. I’m also doing research on historical characters from 11th-century Ukraine and Norway. I’m thinking that may turn into a novel. I’ll see how the writing goes.

Do you have any advice for aspiring authors?
Read as many authors as you can. This is very important and will broaden your horizons and help you as a writer. Also, find support – go to writers’ conferences, join a writer’s group for inspiration and feedback. Most of all, believe in yourself and be persistent and work hard at perfecting your craft. 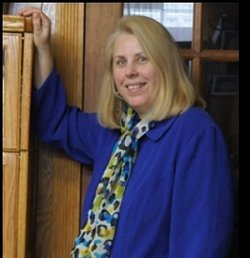 Ksenia Rychtycka was born in Chicago and raised in Hamtramck, Michigan, where she spent large amounts of time riding her bicycle through the Ukrainian- and Polish-speaking neighborhoods. Years later she backpacked through twelve countries in Europe and worked as an editor in Ukraine during the early years of the post-Soviet era.

Rychtycka's story collection Crossing The Border is a 2013 Next Generation Indie Book Award Finalist for Short Stories. Her fiction and poems have appeared in The Dalhousie Review, The Literary Bohemian, Wisconsin Review, Alaska Quarterly Review, Yellow Medicine Review, The MacGuffin, Twenty Years After The Fall (Parlor City Press), and elsewhere.

She lives in the Detroit area with her family and has an MA in Creative Writing from Columbia College Chicago. More information about her work can be found on her website. Readers can follow Ksenia via her Amazon Author Page, and connect with on Twitter and Facebook. 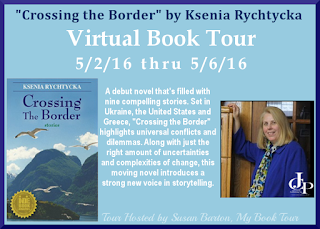 A reminder to the reader ~ before you leave be sure to take a look at the
Funny/Stupid and Interesting Tabs
Posted by Loc Glin Author at 12:30:00 AM