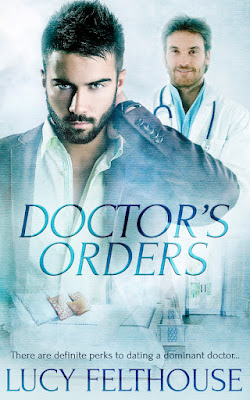 Blurb:
Hospital porter Aaron Miller isn’t expecting a very exciting birthday. He and his doctor boyfriend, Blake Colville, are working opposite shifts, leaving Aaron to go home to an empty house and the prospect of another shift the following day. Just as he’s leaving work, however, an unexpected sexy encounter in a supply cupboard leaves him feeling in a much more celebratory mood. And an impending dirty weekend away with Blake just puts the icing on the non-existent cake. But who needs cake when you’re dating a dominant doctor?

Note: Doctor’s Orders has been previously released as part of the Brit Boys: With Toys boxed set. 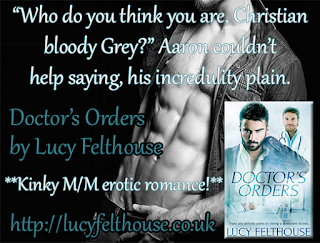 Excerpt:
Aaron hummed contentedly as he walked along the white-painted corridor towards the locker room. He was happy in his job as a hospital porter. He might not be saving lives, like his doctor boyfriend, Blake, but he liked to think he was improving them. He made the effort with the patients he transported around—or the ones that were well enough to hold a conversation with him, anyway. He chatted to them, showed an interest, tried to make them laugh, always remained positive, even when things were bleak. That was his way of spreading a little cheer, or helping someone forget their worries, even if it was only for a few minutes. It was a small contribution, but a contribution nonetheless, and it made him feel good.

The corridor stretched on, and Aaron thought for the umpteenth time that it could do with some artwork on the walls—something other than doors to break up the interminable expanse of white paint and grey dado rail. But patients never came to this area of the building—unless they were lost—so there was no need to spend any more money on it than was absolutely necessary. Aaron understood that, but boy did it make for a dull walk to the locker room.

As he continued his journey, he saw that a supply cupboard door on the left hand side of the corridor was ajar. It was nothing unusual—people often propped doors open with their feet if they were just leaning in to grab something, or used something as a door stop if they needed both hands to carry what they’d come to collect and therefore couldn’t open the door again to let themselves out.

Reaching the door, he’d just opened his mouth to call out and ask whoever it was if they needed help, when the gap grew wider. A white-clad arm appeared and the accompanying hand grabbed the front of his T-shirt, pulling him roughly into the cupboard.

Aaron didn’t even get chance to finish his exclamation, as he’d been slammed against the now-closed cupboard door, and hard, demanding lips were pressed to his. Lips, he realised, as his brain caught up with the turn of events, that belonged to Doctor Blake Colville. Lips that were allowed to kiss his, thank God!

The fresh, spicy scent of Blake’s cologne invaded Aaron’s nostrils, and he relaxed into the kiss, returned it with enthusiasm. Blake’s tongue sought entrance to Aaron’s mouth, and he gave it willingly, moaning as their tongues slipped and tangled together sensuously, and Blake’s firm, lithe body pinned his slightly-more-muscular one against the cool wood of the door. He stifled any further moans that wanted to sneak out, remembering that, hot as the situation was, it was also pretty precarious, and both of them could get into serious trouble if they were caught. Patients may not frequent this area of the building, but the staff sure did.

Reaching out, he gripped the lapels of Blake’s white coat and pulled, so their bodies were crushed together and their kiss grew bruisingly brutal—in a good way.

The move had clearly fanned the flames of Blake’s lust, because he began grinding his crotch against Aaron’s, teasing their already erect cocks and pushing them both rapidly towards the point of no return.

But could there be a point of no return, given where they were? How on earth would they get away with making love—or, in this case, should it be fucking?–in a supply cupboard in the hospital? Granted, it was one of the quieter areas of the building, but bloody hell…


Funny/Stupid and Interesting Tabs
Come back and visit again.