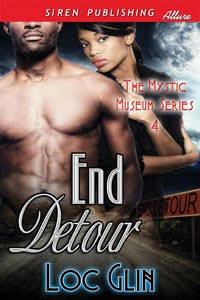 Add to your TBR on Goodreads
BLURB: Visiting Minerva’s Mystic Museum can change lives forever. Magic makes life altering changes possible. Can Shamika and Harold forgive and forget? Can they overcome trust issues and make a life together?

Shamika must give up the life that she has come to accept and trust as normal. Is it time for a change? Does she really want a change? Will her history as a prostitute make that change impossible? Does Harold’s stubbornness prevent it? The unlikely pair are about to find out.

One encounter in a barn catapults these two strangers down a road of self examination and rediscovery. Past events have tainted their visions of what life should be. The powers that be have given them the opportunity to change their lives. Join them as they conquer their fears and the past disappointments that haunt them.

Family ties will be drawn into question. A possible future together will terrify them.

Mystic Museum magic is in the air! 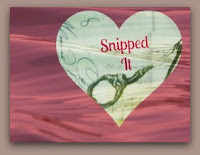 TEASER / EXCERPT:
A naughty teaser:
His hand connected sharply with her flesh three times, and then came to rest almost tenderly caressing her soft and now warm mounds. That caress felt wonderful, causing her anger to fall swiftly away. She could feel her pussy getting wet. She was caught off guard when he suddenly lifted her off his thighs and jumped up from the bale he’d used as a seat. When he released her she was unsteady on her feet. As she tried to gain her balance, she almost fell into his arms. His hands closed around her upper arms as he supported her. He groaned. She looked up into his eyes, her palms on his chest.

The angry eyes that had stunned her were now filled with desire and lust. Desire the likes of which she had never seen. Her pussy reacted to it instantaneously. Of their own accord, her hands moved up his chest. Through her fingertips and palms she noted his rapid breathing. Her body betrayed her and moved into his, a silent invitation.

A reminder to the reader ~ before you leave be sure to take a look at the
Funny/Stupid and Interesting Tabs
Come back and visit again.
Posted by Loc Glin Author at 12:30:00 AM No comments: 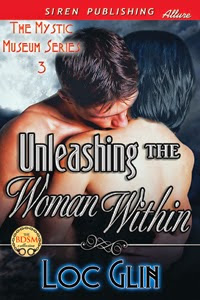 Add to your TBR on Goodreads
BLURB:
Rowena Milestone, corporate executive, has an accomplished career. Yet one thing eludes her. Try as she might she can’t seem to have an orgasm even though she likes sex. Her position in the corporate man’s world tends to intimidate her dates. They perform well enough in bed, but they just don’t push her over the edge, until she meets Stephen.

Stephen Sloan has a secret. He belongs to a very special, no holds barred, anything goes sex club. He never thought he’d meet anyone like Rowena there, so he wanted to believe her outrageous story that she didn’t know how she’d gotten there. When she disappeared without a trace he knew she’d been telling the truth. Now armed with three pieces of information he is determined to find her.

Rowena was devastated when the curator of the museum couldn’t help. Minerva had said, "If the universe is willing, he will come to you." Fat chance she has of that happening. 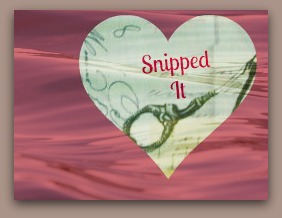 Here is the premise for the Mystic Museum Series

Minerva’s Mystic Museum is located in New York City. Every full moon the “powers that be” choose someone from the visitors of the museum. This someone, known as the mystic walker, will be the hero/heroine of the novel. The “powers” select someone they feel deserves a second chance, or just a chance to follow their destiny. Minerva, the curator and caretaker of the museum meets the chosen mystic walker. Through the magic that has been entrusted to her, Minerva supplies them with the opportunity to change their lives.

TEASER / EXCERPT:
“I am Rowena Milestone. Release me at once, Stephen.”

She said his name with an icy blast. She was used to being obeyed. Maybe she was a Dom trying her hand at a submissive part. If that was the case, she wasn’t doing very well. “Why do you think you’re here, Rowena?” he asked.

“I don’t know.” She looked confused now. “I was in front of the painting, and now I’m here.” She shook her head. “I don’t understand. This must be a dream. It has to be a dream.” It sounded as if she was trying to convince herself.

So she wasn’t a Dom. He chose not to explore her answer, at least not at the moment. “So you’re saying that you don’t want to be here?”

“Yes,” she sounded a little hopeful. Her eyes had softened, and they held the same hope he heard in her voice.

A reminder to the reader ~ before you leave be sure to take a look at the
Funny/Stupid and Interesting Tabs
Come back and visit again.
Posted by Loc Glin Author at 12:30:00 AM No comments: