I AM PLEASED TO WELCOME AUTHOR
Brian Halsey 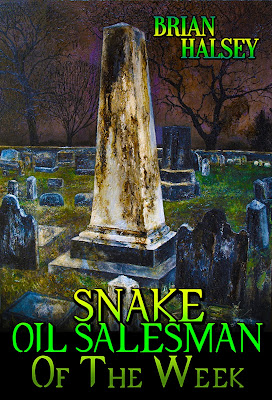 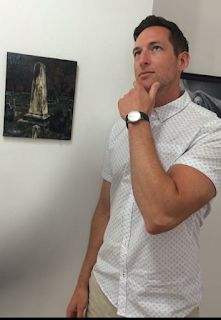 AUTHOR BIO:
Brian Halsey is an American Literature teacher from New Jersey.  He enjoys reading, writing, art and leg dropping people from the top ropes.  You can find Halsey climbing mountains, swimming in oceans, and teaching his children to launch perfectly crafted snowballs.  He believes in crisp high fives and the power of positivity.  He is the type of dude who yells ‘KOBE’ every time he shoots a basketball.  The release of his 2016 Ebook (Of Gods & Gators) earned him several million dollars, which he quickly squandered on a high risk ‘Time Machine’ investment.  Brian Halsey is set to return in 2017 with Snake Oil Salesman of the Week, a unique blend of horror and comedy.  You can find him on the internets for updates and (un)professional tips on how to powerbomb your enemies into
oblivion.

Q: How would you describe yourself as a color? Think personality here. Are you a light and airy pastel person, or more of a deep, dark, sultry and mysterious color?
A: If I were a color it wouldn’t be one single color, it would be a rainbow.  A rainbow consisting of only red, white, and blue.  The colors of the American flag, the 3 most beautiful colors in the world. Plus it would be flannel.  If I were a color I would be a red, white, and blue flannel rainbow.  Final answer.  Damn, I nailed that first question!

Q: If you could morph into any creature, what would it be?
A: Tie: Michael Jordan in 1992.  He was in prime form dunking and dropping 3s all over Portland’s defense.  And also, ‘Stone Cold’ Steve Austin at Wrestlemania 23.  He was handing out stunners left and right.  Vince McMahon, Donald Trump, Triple H...No one was fucking safe from The Texas Rattlesnake that night.
If you don’t mind me asking, why?
A: I do mind you asking, did you read what I wrote?  Self explanatory bro.

Q: When you think of a garden, do you picture vegetables or flowers?
A: Neither, I think of beer.  That is the only type of garden I have ever been to.  I don’t even really understand this question.

Q: What kind of music do you listen to? Do you have an all time favorite song?
A: Punk, grunge, metal, hardcore, an unnecessary amount of powerviolence.  I don’t have a favorite song, but I listen to a lot of Every Time I Die.  One of their guitarists recently agreed to read my book (Snake Oil Salesman of the Week). I completely lost my mind and choke slammed my 3 year old son through a dinner table.

Q: If your life were a movie, would it be considered an action film, comedy, drama, romance, fantasy or a combination?
A: It would be a comedy where I am the punchline of every joke, but I lack the awareness to let it bother me in any capacity.

Q: How do you handle a writer's block?
A: Like a real man.  I totally freak out and start smashing stuff in my garage.  I curse the heavens.  I blame everyone but myself, then I get belligerently drunk and declare I’ll never write again.  By the time all of that is finished, I usually come to the same conclusion:  Kill off my least favorite character and move on.

Q: What geographical locations are your favorite and why?
A: I love cemeteries because they remind me of the grim and inevitable finality of life.  They remind me not to take certain things so seriously because my time here is limited.  I like driving by the ACME parking lot in Cape May Court House where teenagers vape and ride razor scooters,  it reminds me that no matter how much of an asshole I am...there’s way worse out there.  Additionally: The Grand Canyon, Oslo Norway, and the beaches of New Jersey all provide scenic beauty that inspires me.
Q: Do you like to read the genre that you write?
A: No, but not for lack of effort.  Sadly no one else is dumb enough to bother writing drunken modern Jersey folklore / wasted  youth culture / punk rock horror /  poorly timed, sarcastic humor, with an awkwardly religious twist.
Q: How does the man/woman in your life feel about the genre you write? Has he/she read any of your work?
A: I’m pretty sure my wife hates it, but she is too kind and beautiful to tell me the truth. To many people, she is known as ‘Smart’ Sara, and this is so true. If she told me my books sucked, I would have taken my sweet ass time putting up a new fence around our yard.

Q: What are you working on now? Would you like to share anything about it?
A: I am promoting Snake Oil Salesman of the Week.  It was the book I always wanted to write.  Fast paced horror and humor.  On the surface it is wild and goofy, but if you do a little digging, you will be rewarded with timeless wisdom.

Q: Do you have a new book coming out soon? Tell us about it.
A:  Snake Oil Salesman of the Week is OUT NOW!

Q: How can we find you? Do you have a web page, FaceBook page or any buy links?
A:  Yes, I do. Here are the links.

Instagram > http://www.instagram.com/halseyfromthetopropes (or search my name: Brian Halsey.  It is set to private, but I will accept anyone over 18) 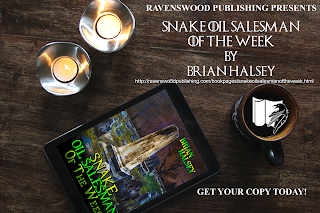 ONE LINER:
Andy James is a pompous jerk on a quest for artistic greatness.  Only the Devil stands in his way, and he could care less.

SYNOPSIS:
Andy James is an artist, a fighter, and a big time a-hole from the small town of Tuckerton, New Jersey.  While in pursuit of artistic greatness, James comes across a shapeshifting (Jersey) Devil during a chance encounter in the isolated Pine Barrens.  Confident to a fault, Andy James believes he can get the best of the Devil, but unfortunately loses his soul in the process.  Suffering from a carnivorous rage that is a product of the Devil’s sourcery, James goes on a mission to find his evil nemesis.  The grueling hunt leaves Andy beaten and taunted by the supernatural and human beings that surround him.  With time running out, Andy’s fortune begins to turn when he discovers a loophole in his soulless existence.  Armed with sacred knowledge and endless bravado, Andy James returns to the wilderness for a showdown against the most ancient evil known to mankind.