Dallas Coryell ~ an interview and his novel ~ Melody's Key

I AM PLEASED TO WELCOME AUTHOR
Dallas Coryell 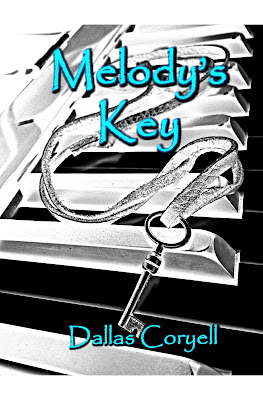 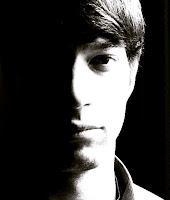 About The Author ~
Dallas Coryell is a musician and author residing deep in the untamed wilds of Michigan, USA, where he desperately attempts to assign meaning to his world through bouts of maniacal creative catharsis and pitifully doomed hopeless romantic fantasies. All of the songs written by the characters in this novel are real and can be viewed on the author’s fledgling YouTube channel: https://www.youtube.com/user/D allasCoryell1 Selfies and other assorted randomness can be found on the author’s Instagram: https://www.instagram.com/dall ascoryell

Q: How would you describe yourself as a color?
A: Black.  Now at first this is going to seem dark and maybe slightly emo…but wait!  Black is a combination of all colors, so for me is a representation of blending many personality types, interests and moods.  I tend to be somewhat intuitive and empathic, so sometimes I feel like a bit of a chameleon with the way I adapt to and reflect the people around me.

Q: Are you a morning person, or a midnight candle burner?
A: I have always been a night owl, preferring the serenity of a world wrapped in shadowy slumber to one of chaos and light.  Ok, now I’m really starting to sound emo, or perhaps like a vamp...  Actually…let me see your neck really quick.

Q: Tell me one thing about each of the four seasons you like. It can be anything.
A:        Winter = Fireplaces and promises that this year I will finally learn to snowboard
Spring            = Makes me think of a past crush.  Her fav season ;)
Summer = Cedar Point!!!
Fall = My favorite season.  Cider Mill, leaves, hoodies, football and my father.

Q: What kind of music do you listen to? Do you have an all time favorite song?
A: I listen to literally EVERYTHING.  Kiiara to Backstreet Boys to Tool.  My playlist looks like a Schizophrenic nightmare, but I love it.  My favorite song of all time is Name by the Goo Goo Dolls.  It completely encapsulates the beautiful melancholy and angst of my teenage years J

Q: When did you start writing and why?
A: I penned my first “novella” in 5th grade entitled “King Arthur and the Gnome King”.  I was obsessed with the story of King Arthur, and naturally, I wanted to combine it with my love of evil monsters.  My dad said it was great.
Q: Where do you get your ideas?
A: There is a strange and wonderful mix of sci-fi affinity and hopeless romantic obsession that supplies most of my “middle of the night” ideas.  The first time someone said there was no way to blend the genres I was inspired to prove them wrong.
Q: What do you think is the hardest part of writing a book?
A: The crippling self-doubt and fear that people will hate the story.  Since the writing comes from my heart, rejection of the work is a de facto rejection of me.  Or at least that’s what the overly-dramatic insecure part of me swears.
Q: Describe your favorite heroine?
A: Selene from Underworld.  Strong and capable but also vulnerable and lonely…although she would never admit it.

Q: What are you working on now?
A: I’m writing 4 books at the moment.  A YA romance, a time travel romance, an apocalyptic sci-fi romance and a futuristic crime drama.

Q: Do you have a new book coming out soon? Tell us about it.
A: The YA romance is coming out next.  I have to be super secretive about it because I’m still a few months out, but the main character is a 17 year old genius stuck in a mental institution.


Synopsis:
“His eyes settled on her…piercing green embers of flame that revealed the ferocity of his pain and passion, yet still shrouded him under veils of ever deepening mystery that made every ounce of her ache to unravel him.”

Tegan Lockwood’s dreams were dead, sacrificed on the noble altar of duty before they ever had a chance to live. Her entire existence was disappearing into the abyss of apathy as she labored her days away keeping her family’s struggling business alive. There would be no emotion, no color, no beauty in her life. That is, until a mysterious visitor begins to draw her out of the darkness of her past towards something that will challenge the boundaries of her world, and unlock the most deeply held secrets of her heart.

Excerpt:
“It's just an expression, I assume you have those in America?” This time Tegan completely intended the playful sarcasm that dripped from the comment. She even ventured a slight grin to put him on the defensive a little, but Mason was quick with his reply.

“Yes, we have them. For example, don't judge a book by its cover.”

Mason had smiled disarmingly when he said it, but the underlying message to her was clear. Considering what happened at the pub, perhaps she had been a tad hasty in her judgment of his character. Tegan bundled the tools she had been cleaning and attempted to pick them up all at once in order to move them into the shed, but before she could take two steps they began slipping from her hands. Just as she expected to see the entire bunch go crashing to the ground, Mason’s hands appeared and encircled hers, stabilizing the load. His hands were strong, but soft, and their sudden steadying warmth took her completely off guard.

She had been careful to avoid looking directly at him during their entire exchange so far, but her discipline wavered for one instant and she allowed herself to meet his gaze. She immediately regretted it. His eyes were two fiery emeralds that seemed to have already been waiting millennia for her to find them. The depth they held was something she had not expected; there was profound suffering there, but also something wild and passionate and unbridled...like the feeling she got while walking through the estate gardens after a summer storm.

Somehow his eyes burned through the walls of her meticulously constructed defenses as if they were flash paper. She felt as though he was somehow seeing her...the real her, instead of the protective façade she normally projected to people she didn’t know. In that instant of unexpected vulnerability Tegan was surprised to find she was capable of anything. She felt the boundaries and inhibitions that normally constrained her fading like a winter sunset.

A moment after Tegan felt the hurricane begin to stir within her, she smothered it for fear of being consumed. Where in the world is this coming from? She had only been looking at him for a moment, but it felt as though they had been staring at each other for hours. She abruptly pulled her hands free, which sent the tools clattering loudly into the dirt. In truth, she had forgotten they were suspended between their interlocked hands. Grateful for the distraction, she kneeled down and began gathering the fallen load, which he immediately assisted her with. Between them, they got all the tools to the shed in one trip. As the electricity of the moment faded, Tegan began feeling silly for even thinking such ridiculous things. I know nothing about him. She made a mental note not to look into his eyes again. There was a reason so many girls went crazy over him, and he probably knew exactly what he was doing with those eyes...and that crooked smile.